This week saw fewer high totals from goalkeepers and defenders but more from midfielders and attackers. Costa’s brace and Lukaku’s hat trick being the stand outs. However Costa is now two cards away from a ban and could pick up a red at any time so this warns the cautious manager away. Lukaku is mercurial – you just know against an ‘easy’ team like Middlesborough at home next week that he’s going to blank. Nearly all the double figure scores came from midfielders but this area is so hard to predict. So although this week could have been a shocker or brilliant, I’m thinking this may continue for a while until it settles down or until we see a pattern. Certainly our league’s top teams have been shaken up including yours truly dropping out of the Top 10 to 28th (thank you Lukaku, it could have been much worse). Well done to Danny Frondigoun of the Law Society Gazette who’s top and has been very consistent across the four game weeks so far. He hasn’t played any chips yet either so the Wild Card may be useful in the weeks to come. Danny is ranked 11,000 from 3,700,000 and a nose bleed isn’t to be expected as he finished 26,000 a couple of years ago. Ben Rainbow of explori is in 2nd place but a good 32 points behind. His game week rank of 11,000 meant he shot up the league – a captaincy of Lukaku was key. Ben – I bet you couldn’t believe your ears when you heard about the hat-trick. Ben also has his wild card. Curtis Reed of RadiumOne is in third who didn’t have a great gameweek but, equally, it wasn’t that bad. Coupled with his three strong weeks prior then he’s in a good place. Again no wild card played. Here’s the Top 10 after four weeks: 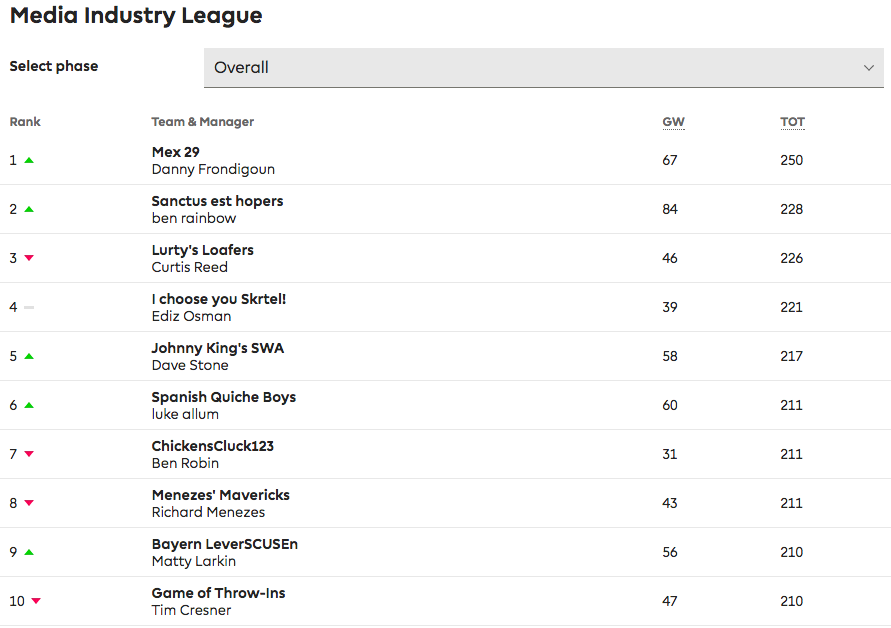 To compare with last week’s top ten then click on this link.