Sam Hawkins of Globespan Media took top spot for the media league this week with a rank of 17,000 for the game week. How did he do it? Nothing remarkable or lucky but consistent points across nine of the first eleven. He has that man Charlie Austin, for example, who’s starting to bring back memories from a few seasons ago when he was the budget-busting must-have striker for QPR. I’m going to hold off for a couple of weeks though as up next he has Man City away and then Chelsea at home. Chelsea seem mercurial so far this season. Who knows where they’ll be in two weeks but not playing in Europe will surely help. As was highlighted a couple of weeks ago, Charlie Austin was signed at the time by our league’s leader Danny Frondigoun and it was seen as a potentially good signing. Well, his timing was spot-on yet again as this was just before Austin started scoring in the double figures. Danny is now up to an incredible 321 in the world. Everything he touches seems to turn to gold. His GW rank is 48,000 this week. Keep doing that and you’ll be in the top 100 pretty soon. Danny has Sanchez, Walcott and Cazorla across the middle, taking a 4 point hit to make it possible. Arsenal’s fixtures are so good right now that the hit will no doubt continue to pay off just as it’s done this week. Weaknesses? I’m still not sure about keeping Kante given he’s a holding midfielder. Plus Wilson, who’s on the bench hasn’t yet played. I guess you have bigger fish to fry Danny. Curtis Reed of RadiumOne and Ben Rainbow of Explori are now second and third in very respectable placings of 25,000 and 27,000 respectively. If Danny does fall back at any stage then these guys really aren’t too far behind. Plus there’s chips in the new year of course. I’m playing my All Out Attack for next week. Has this worked for anyone yet? Can’t see that it’s much use. Here’s the top 10 in the media industry league as it stands after game week 8: 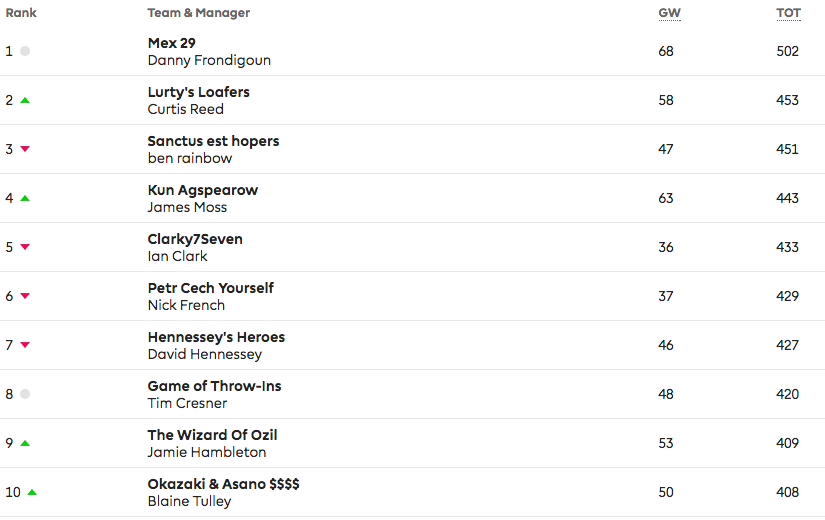