Looking at performances from the media industry league, yet again most of the points came from the midfield this week. Liverpool remarkably posted three midfielders scoring over 10 points in Lallana (15), Milner (14) and Coutinho (14). Danny Frondigoun, our glorious leader whom I wrote about last week, took a 4 point hit to transfer in both Aguero and Lallana for Mirallas and Iheanacho which says it all – Danny can do no wrong. I can’t get my head around which midfielders to pick. Lots of people are clinging onto Firmino which makes sense but he’s not scoring. Surely Hazard will get a pen soon – ? I’m holding Ibra too who played really well at the weekend but didn’t score points. Sanchez is great, obvs, but very expensive. Curtis Reed sits second in the league with a game rank of 51,000 which is very respectable. But it’s still 46 points behind Danny. I’m fascinated to see for how long you can keep it up Danny. Some of those above you have probably played their chips too. Matty Larkin of Mozoo Group had a bit of a shocker and so drops out of the top 10 allowing Dave Stone of Time Inc to sneak back in. Come on the Tranmere. Most of the other names are familiar too. Here’s the Top 10 after game week 6: 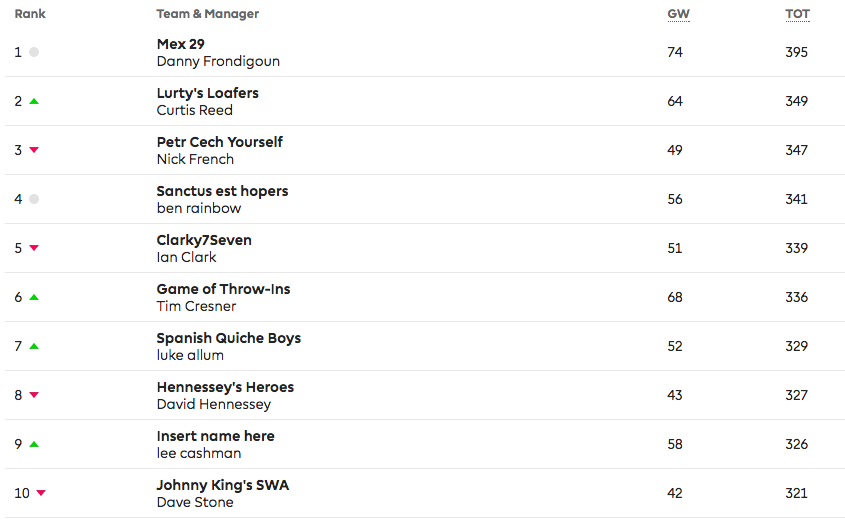 I’m thinking that Danny Frondigoun of the Law Society Gazette no longer has his eyes on winning the media industry league.

Nope, Danny’s closing in on top spot for the global game. He’s now ranked 589th in the world from a total number just under 4 million. Incredible stuff.

The rest of us are someway behind now. Curtis Reed of RadiumOne is up into second; Nick French of Haymarket dropping down to third.