Danny Frondigoun of the Law Society Gazette is now ranked 2993 in the world and heads up the media industry league by some margin. Wow. So what’s he been doing right? He’s not been fluky with a ridiculously good week here or there; he’s just been consistent as his weekly rankings demonstrate:

Danny’s just played his wild card and some of his picks are non-template and seem to have worked out well: Charlie Austin (1% ownership); Iheanacho (7%); Mandanda (3%); Mirallas (4%). Austin could be an inspired choice. I assume Iheanacho will go when Aguero returns? A consolation to the remainder of us is that his bench contains two players who didn’t play at the w/e and another who’s a holding midfielder. Must have been bad luck Danny given you played your wild card – ? Other than the WC he’s only made two transfers. So I’m not sure there’s too much to learn except pick/ guess your captains and players wisely. The remaining top three is rounded out by Nick French of Haymarket and Ian Clark of the Law Society too. What’s going on with the Law Society? Again, most of the big points came from the midfield. It’s so difficult to pick from this lot. Townsend looked dangerous but investing in Palace? I have Hazard who blanked again. Time to ditch? 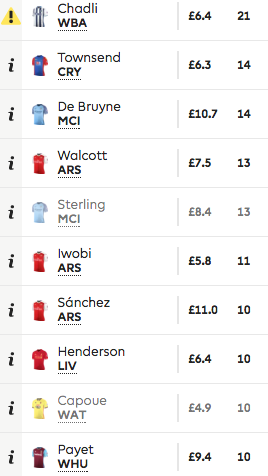 Here’s the Top 10 as it stands after 5 game weeks. Who’s not getting Aguero in for the next game??? 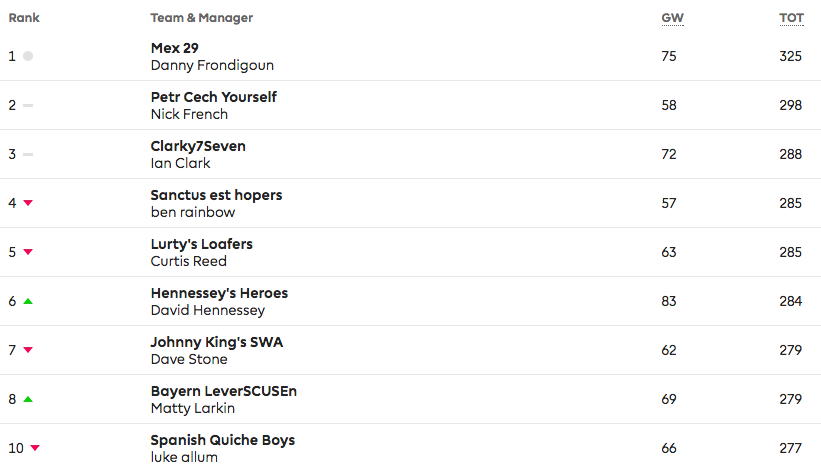