This week saw the big two of Ibra and Aguero not deliver. Few captained outside of these two so I guess it wasn’t a great loss for most in the mini leagues. It would be a massive differential though if you didn’t select one of these two but instead got it right.  Indeed it was in the midfield where all this week’s points came from. Captain one of these top two and you’d have climbed hundreds of thousands of places: 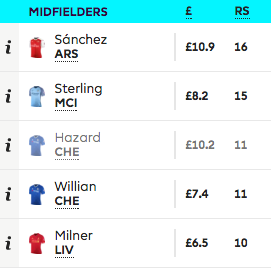 Saying that, it would have been risky not to captain them given their fixtures, i.e. Ibra at Hull and Aguero at home against a depleted Hammers side. I’m not ready to move my money onto Milner, but Sanchez and Sterling look attractive. Sanchez might just be a shade too expensive but money might become available if Aguero is banned. We should find out in the next 24 hours but 40,000 managers have already transferred him out. One point to note on this: Aguero’s potential ban of three matches is limited by one of them coming in the league cup. Plus the game away to Man U will surely see Mou parking the bus and thus limiting Aguero’s opportunities anyway. So how much are we losing by hanging on to him? In the Media Industry league Ben Robin retains first spot with an overall rank of 80,000. It’s a good looking team so there’s no reason for Ben to drop away (at the moment). He has, however, played both his triple captain and wildcard. Matty Larkin had a shocker dropping from 2nd place to 17th in this GW with no points coming off the bench. Wild card Matty? Instead, Curtis Reed of RadiumOne moves into 2nd place with an excellent score of 58 points. Curtis made the bold move of captaining Hazard which clearly paid off. Danny Frondigoun moves into third place just one point behind. Here’s the Top 10 after week 3: 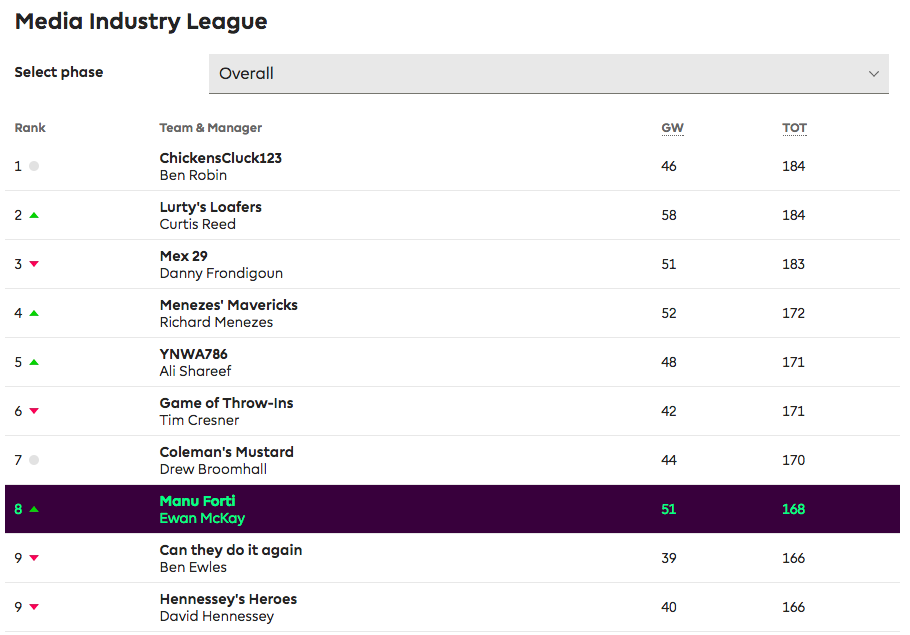