Should we start planning to get players in for these teams?

Borough and Palace aren’t immediately exciting although Big Sam’s team has responded recently by winning their past three games. Palace hardly have the most appealing pair of fixtures – CP will now travel to Liverpool before hosting Spurs. Middlesbrough face two vital relegation clashes, with a trip to Bournemouth preceding their home encounter with Sunderland. These might be good if they get a bounce having disposed of Karanka. Man United, meanwhile, will hit the road twice – making their way to Burnley before rolling up to neighbours City on Thursday April 27 in the final match of GW 34.
West Brom will blank in GW 34 as a result. Their fixtures are also pretty rubbish between now and then anyway so I’d be reluctant to add any to my squad. Though Brunt’s set piece duties must surely garner him some points soon.
For me, the above fixtures aren’t that exciting. Given United have 2 x DGWs coming up then it makes sense to get Ibra back in when he returns from suspension. But we still need to find out when the following are rescheduled:
Arsenal v Sunderland
Chelsea v Watford
Leicester v Spurs
Man City v West Brom
Southampton v Arsenal
Southampton v Man United
Think I’m going to keep my powder dry for now.

How’s the top of the media industry league looking?

Danny is still out in the lead however he has used all his chips. Using his DGW chip this w/e gave him 10 extra points. Why didn’t you save this for a DGW Danny? Curtis is in second but he still has both his Triple Captain and Bench Boost. Get these right in two DGWs and he’s right back in the mix for the win. Ediz Osman of Somo is in third place. He’s 62 points behind Danny but has both his Wildcard and Bench Boost. This should be worth quite a lot for when he plays his WC before a DGW and then bench boosts. This could also put Ediz right back in there. Just two points behind Ediz is James Moss of Manning Gottlieb OMD and his potential is even greater: he still has a wild card, bench boost and Triple Captain. So he can 3C for one DGW and then, like Ediz, play his WC before a second DGW and then bench boost. Boom, James can win this thing too. Here’s the Top 10 after GW 29 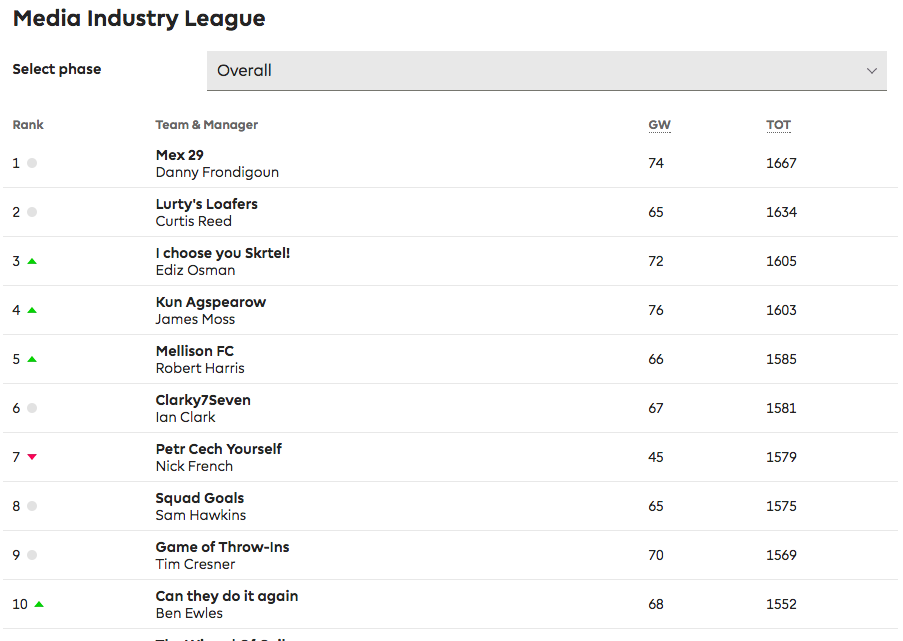