If, like me, you shipped in Kane for Ibra, after he elbowed Mings a-la Marouane Fellaini, then it now looks like we’re going to have to ship him right out again.

Perhaps it was a risk getting him in so soon but Spurs’ fixtures combined with Kane’s form meant his value was going to rocket. We’ll find out later how bad the injury is but he’s already gone for me.

Listening to the Liverpool game on Sunday (they were awful) I was fully expecting the highly owned Mane or Coutinho to bag at least one. But who should score but the unlikely Can and Wijnaldum? Liverpool’s midfield continues to frustrate fantasy managers.

How did everyone perform in the tricky GW 28 with only 8 teams playing? Pretty well as I look down the list of teams.

It got very tight after GW 27 as Curtis Reed of Radium One closed the gap to just 8 points behind Mr Consistent, Danny Frondigoun of the Law Society Gazette. However Danny managed the blanks in GW 28 more successfully coming in with a decent 47 points from just 5 players versus Curtis’ 31 points from 5 players.

Danny benefitted from Randolph’s 10 and then Barkley and Lukaku. If you had Lukaku then you probably captained him so I think most people got his 24 points. One man who didn’t was Nick French of Time Inc who’s currently third in the media industry league. Nick only managed a tiny 11 points which was from 4 players. Still, his game week rank placed him only just above half way nationally which goes to show either (i) how poorly many teams performed or (ii) how many ghost ships now exist (that continue to beat me in other weeks). This has meant that a sizeable gap has opened up at the top looking much like a top 2 to battle it out. Much will depend on who still has chips I suppose for the imminent doubles.

We don’t yet know when those doubles will be played but of true import to managers is to look out for the 2 x doubles that will affect Arsenal, Man Utd, Southampton. No doubt we’ll be wanting to load up on their players in due course.

Here’s the Top 10 after 28 weeks. Only 10 more to go until we find out who is crowned champion of the league and wins the incredible prize. 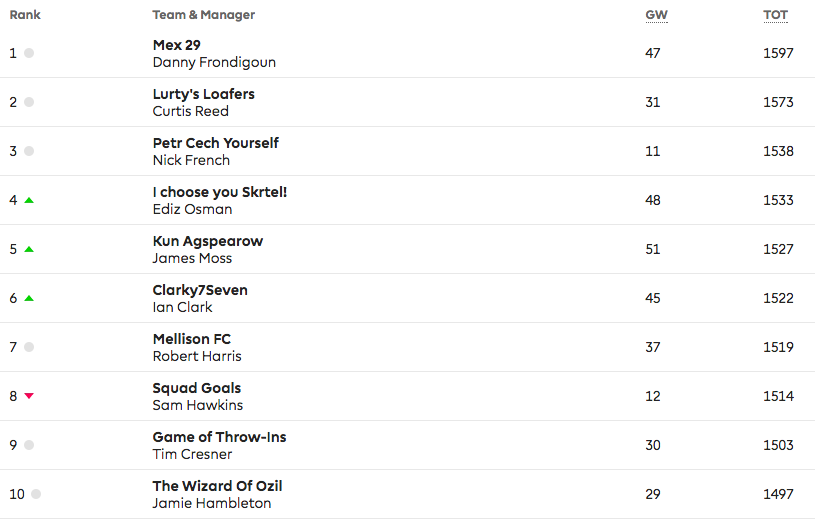