We’re entering that tricky period where planning really helps.
I didn’t manage to get out 11 players last week. But neither did most people. Of the top 5 teams in the media industry league nobody fielded eleven players. So maybe it’s not such a problem. Let’s have a look at these top five teams to compare how they’re going to fare for the blanks and DGWs ahead. Firstly, they are as follows: 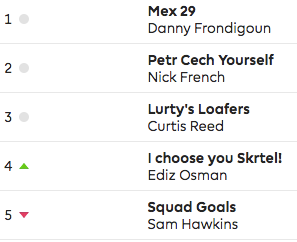 Who’s been taking hits?
So who’s going to need to take hits for the blanks? The above numbers could even be lower for some as those holders of Pieters will lose him too if City beat Huddersfield tomorrow. Perhaps they can use their wild cards? Nope. Only one person (Ediz) from these top 5 teams hasn’t used their wild card. I’d save it anyway. Given the DGWs coming up after 30 then surely that’s going to give Ediz a strong hand to play. Added to all this is the potential Man City DGW in 27. Are teams going to save their transfers for 28 or spend them to get in City players? Maybe two hits to get in and captain, or triple captain, Aguero? I can see lots of teams being tempted. But then you’re really screwed for GW 28. These weeks could be key for those battling to head up the league. What’s your plan Danny? Ediz is 43 points behind, is well set up for GW 28 and still has his wild card. Keep picking your captains correctly I think is the way forward! Here’s the Top 10 after 26 weeks: 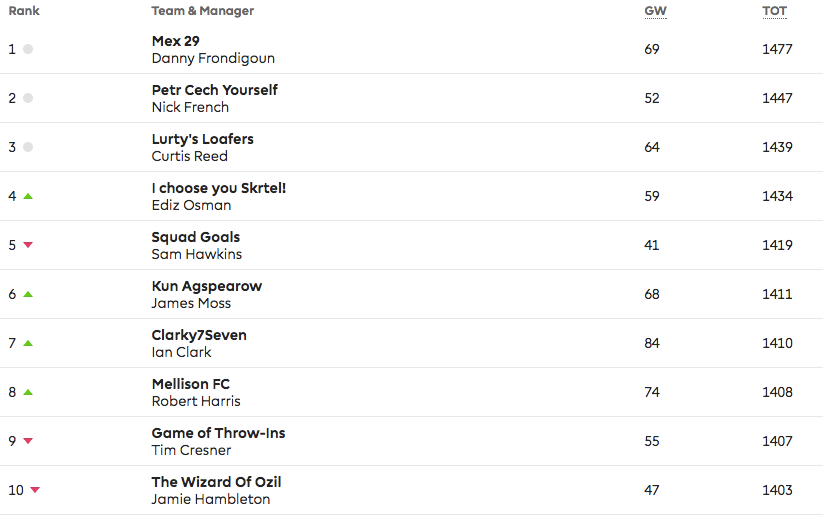