This week saw high scores from a number of well-owned players but teams’ performances seem to be dominated by two factors for both this week and next: Sanchez’ 23 points and Aguero’s red card.

A key factor in Danny Frondigoun leaping onto the cusp of entering three figures again was his captaincy of Sanchez: 46 points from one player, just like that. I’d have killed for such a performance two weeks ago when my eleven players scored just 26 points between them!

Aguero’s horrible tackle on David Luiz means he’s now out for the next 4 games. The fire sale is now on and over 500,000 managers have already transferred him out meaning a price drop of .1 so far. He’s still owned by 1.3 million managers, many of whom will be ghost ships, but surely this will drop further. Sickeningly, Danny racked up points from the likes of Mane, Costa, Phillips and more, in addition to Sanchez. He even had Aguero’s red card so he now has lots of extra money to redistribute across his squad. Lord help us next week. Great work too from Spurs fan, Simon Johnson of Round and About Publications whose team, Best in Alderweireld, ranked in the top 34,000. He too captained Sanchez but also squeezed 12 points out of Benteke whose performances are somewhat mercurial. How long does Pards have left? Can’t be long surely?? On a separate note, I was looking at those teams topping the world earlier and was surprised to see that the supporters of one club are dominant in Fantasy Football. Which one? Liverpool FC. Take a look at the team 5th in the world called Madridista. Here’s their ranking in their respective leagues: 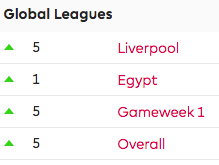 So this team is both 5th in the world and 5th in the Liverpool Supporter’s League. As a Liverpool fan this demonstrates a pretty conclusive fact – Liverpool fans clearly know more than most. I imagine very few of these have actually been to Anfield of course. Here’s the Top 10 after 14 weeks: 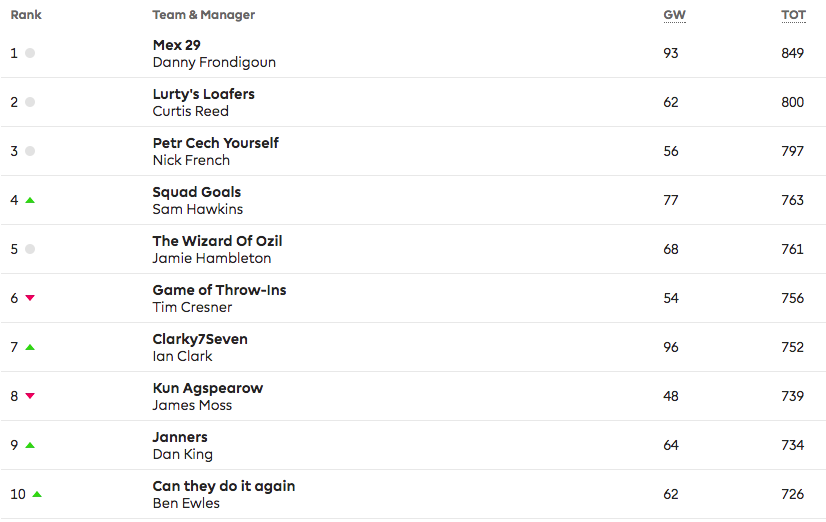