Without wanting to state the bleedin’ obvious, teams’ scores this week were dictated by a small number of players with high ownership. Either you had them or you didn’t. So the hero of last week in our media league for sales and marketing professionals, Curtis Reed, this week ranked over 3,000,000 because he didn’t have Sanchez, Sigi, Walcott, etc. His top end players of Coutinho, Hazard, Capoue, who all performed spectacularly last week, didn’t deliver this week. Danny Frondigoun by contrast had exactly those types of players. So it’s swings and roundabouts for the top two. A third challenger though now enters the mix. Nick French of Haymarket, with his rather excellently named team Peter Cech Yourself, had a game week rank of 11,000 and with it now enters the top 10,000 just behind Curtis. Crucially, he captained Aguero, had Sanchez and McAuley, plus points from Costa, Austin and the top keeper this week, Grant of Stoke. Nick’s pretty much been in and around the top 100,000 all season, bobbing up and down due to mercurial weeks. Quite different from Curtis’ steady progress where he was regularly 300,000 ish, Nick could be 1,500,000 one week and 150,000 the next. A note of mention to Justin Lawson of Black Knight Media who also put in an 84 point performance this week. Gets you out of the 1,000,000 bracket which I know all about this season. No one likes being in 7 figures, good work fella. So the league’s wide-open now. Here’s the top 10 after 13 weeks: 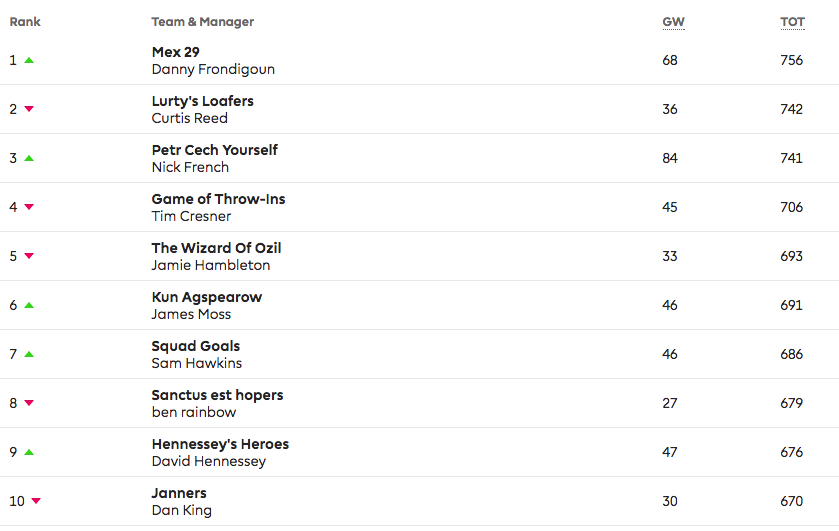