Having opined on inexorably about how brilliant Danny Frondigoun has been performing in this year’s Fantasy Football League for the media industry, he’s now been outclassed (for now?).

Yes, Curtis Reed, now it’s time for me to blow smoke up your a*se too!

Kidding aside, Curtis’ progress since Game week 4 has been unstoppable. Nothing fluky, just steady, robust progress. Here’s his ranking since GW 4:

Curtis has only taken 12 points in hits too. Perhaps an indication of not needing to when it’s going your way. I’m up to 16 with my sorry team but on the cusp of taking many more. The team looks well balanced too. Any concerns? Perhaps that the second keeper isn’t playing (Jakupovic), Amat’s in and out, and Bolasie’s a bit ‘meh’. Strengths? Capoue was kept in – bit of a result this week. And Curtis has Costa who’s on fire. I’ve been holding off from transferring him in due to that impending yellow card. For those of us who don’t have him then it’s inevitable we’ll see the yellow as soon as we move him in. How much higher can Curtis go? Can he match Danny’s top 500? Curtis’ top finish was 61,874 in last year’s season. You’ll crack that this year for sure. Danny’s close behind in 2nd and Tim Cresner of Haymarket is only 45 points behind in third placing nationally a very respectable 48,000 position. Yours truly is having an absolute shocker placing 3,869,396 and 3,729,959 for my last two game weeks. Just can’t get it right. One other previous strong finisher did well though this week with the highest points total in the league. Good work that man Steve Connolly with 66 points coming in at 51,000. Captaincy of Costa was key as most of the other big hitters didn’t score. But Sunderland’s resurgence with Defoe also helped. Here’s the top 10 after week 12: 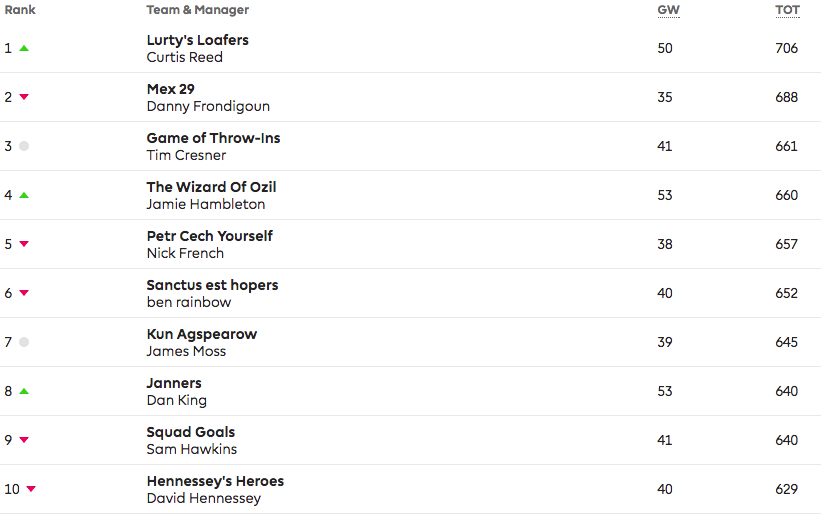