Sam Allardyce does it again (and so do Newcastle). The toon bounced back from relegation last time so I’d imagine a club of their size to do the same again. For Sunderland, however, they simply refuse to be dropped. I know one man who’ll be happy with this – our fantasy football winner from two seasons ago Phil Davison. If you picked Sunderland players in your team for the double game week then you’ll have done well: GK Mannone 11 points; Kone 21; can Aanholt 17; Yedlin 10; Kaboul 8; Defoe 10. Indeed it was a real week for the lesser named players, see Redmond of Norwich claiming the top points-scoring midfielder with 17 points. How has the DGW impacted on the Media Industry Fantasy Football League for 2015/ 16? It looks like three managers can now win it: Leon Parks of the New Statesman, David Hennessey of Ziff Davis and Adrian McSwiggan of Incisive Media. Ranked from 25,000 to 39,000 globally, the trio have performed very strongly and with only 19 points separating them then any of the above could win. The final day is always a bit unpredictable with most teams having nothing to play for so really anything could happen. 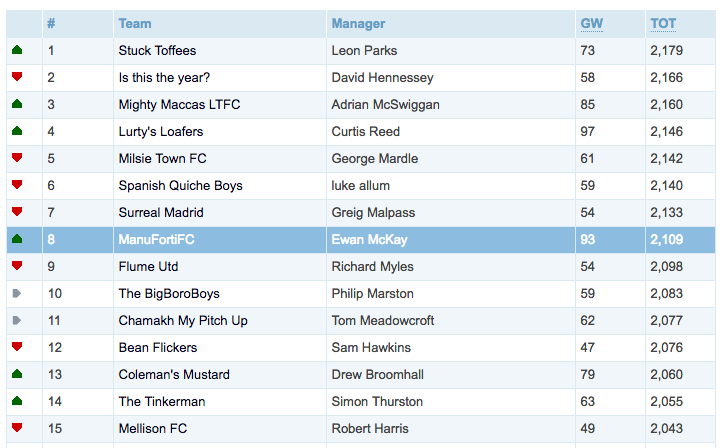 I’ve now pushed into the Top 10 so I’m hoping to hold that position and aim for a finish within the top 100,000. One issue I anticipate is picking a starting 11 as I expect many teams will rotate. What Liverpool players will play ahead of their cup final? Same for Palace and Man Utd. Will United go for it in order to try to secure Champions League football or are they resigned to 5th and want to win the FA Cup? Good luck for the weekend.