George Mardle of Sports Revolution and David Hennessey of Ziff Davis continue to excel at the top of our media industry fantasy football league placing 3498 and 3705 respectively. This is massively impressive chaps. Can one or either of you push on to finish in the top 1000? A big shout out too to Richard Myles of Flume Training. As a Nottingham Forest fan, I knew that Richard was familiar with the lower leagues of English football. But with his fifth straight green arrow Rich has now demonstrated that he knows what’s going on in the Premiership too. Nice work my friend.

Richard is one of many scrapping for third place in the media industry fantasy football league because David and George seem to have created quite a gap at the top. That said, with at least two double game weeks approaching and the use of chips being available then this gap could certainly narrow. Our top three have used all their wild cards and chips. What about below them?

Leon Parks in 4th still has his triple captain available; Adrian McSwiggan in fifth and Curtis Reed in sixth have both used their wild cards but do have all their chips available. Surely they will bench boost for one of the doubles and then triple captain for the other. Get these right and the points haul could be significant. Think Aguero’s 25 point haul x 3 or something like that happening twice in the double game week. Here’s the top 15 after GW 31: 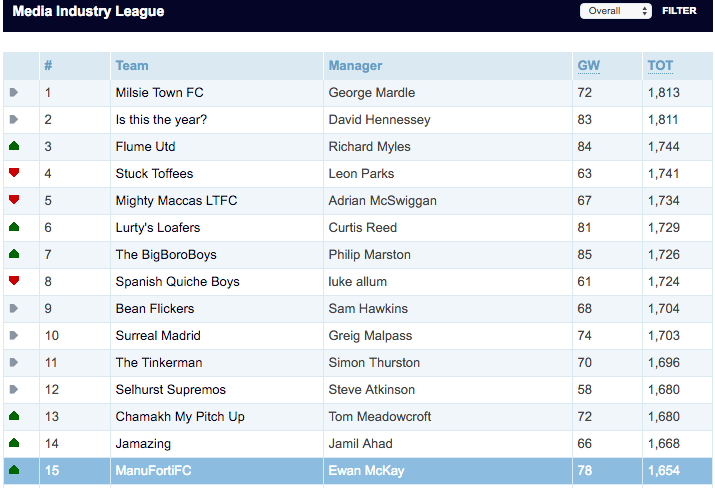