Aguero finally delivers. 50 points for many.

There were lots of high scoring options this week across the midfield and up top. Little reward for defenders and keepers. Widely-owned names include Aguero 25, Sanchez 16, Eriksen 15, De Bruyne 15, plus lots more with decent scores. Pretty much everyone had a high score in the Media Industry League so there weren’t too many gains to be had there. But nationally lots of people must have missed out on Aguero as numerous teams in the league jumped hundreds of thousands of places. A couple of stand out weeks with 113 points from Incisive Media’s Adrian McSwiggan and ADBA’s Jamil Ahad have really moved them up the pile. Adrian’s now pushing for top spot, just one point away from The Economist’s Martin Cheng. Martin’s been consistently high up since wild carding in GW3 but this week has seen him move up from 100,000 nationally to 16,000. Excellent stuff. George Mardle of Bauer rounds out the top 3. Rodgers has gone of course, as has Advocaat, so to commemorate his departure Football 365 has compiled some of his best quotes over the years. It’s worth a read at this link. Here’s an appropriate one:

“I am the same guy who nearly won us the league, but better. I think I have shown in the early stages of my management – without being arrogant – that with a talented group of players I can compete at the top end of the league.” 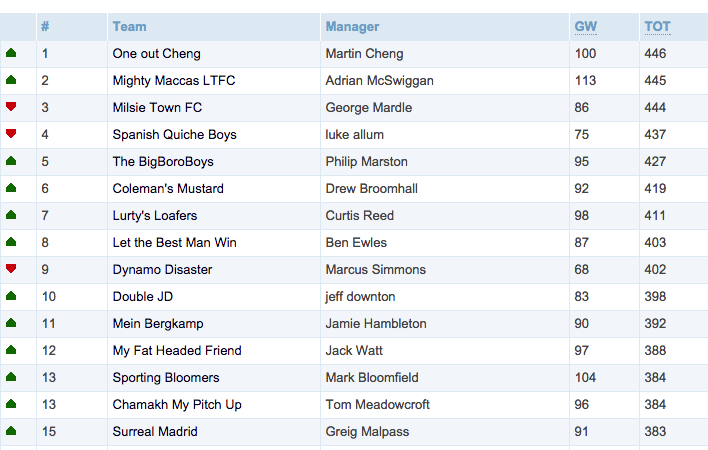