With 7 Gameweeks behind us teams seem to be finding their position within the media industry fantasy football league. Richard Edwards of Centaur remains top of the league despite posting a Gameweek score of 1,500,000. Indeed he’s still 10,000 nationally. After a strong performance last season Richard’s really proving his class by replicating in 2014/15. Where are last year’s consistent top 2 of Phil Davison and Steve Connolly? Progress is still possible of course. We know that teams can massively improve over the course of the season as last year’s winner, Phil Davison, proved after moving from 800,000 to the top 30,000. Certainly, I’m hoping this is the case after yet another week to forget. Well done Sacha Cunningham of Incisive Media who’s enjoyed a great week to bring himself within striking distance of Richard. A quality midfield performance there with Fabregas, Henderson, Hazard and Sigurdsson. Here’s the latest top 15 ahead of the international break: 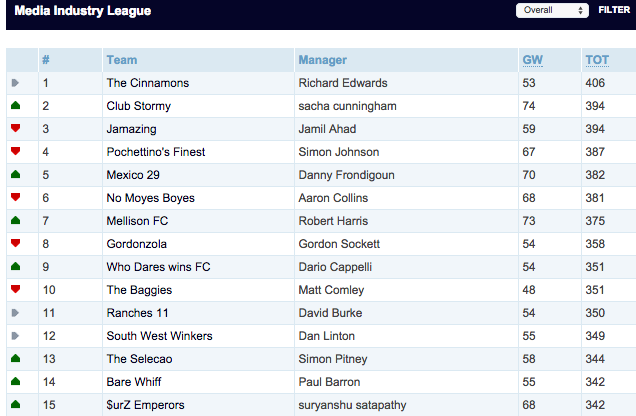