Another great week for Mahrez owners. Another painful week for those who have been holding off (me). This guy cannot stop scoring. He could well become the best fantasy asset since Michu was banging them in for Swansea a couple of years ago. That said, some other differentials are starting to realise themselves. Martial’s only owned by 9.8% but has 3 goals in 2 games. Pelle is owned by 11.8% and has 4 goals plus lots of shots in the box. Palace have lots of options. Does Chelsea’s turn around start from here? This season is very difficult to predict. After a less strong week from Dan King we now have a new top 3 and a new leader of the Media Industry League. George Mardle from Sports Revolution is in top spot with a national placing of 51,000. Interestingly George used one of his chips this week, that of All Out Attack. This means you can play with 5 across the middle, 3 strikers and just 2 defenders. So when you think your team’s attacking options look good for a particular week then play it. It’s the weakest looking of the chips so it’s not a biggie if played incorrectly. It looks like George played his owing to injuries – he only has two fit defenders. Still, it worked out pretty well despite Aguero continuing not to find the net. What’s up with him anyway? Martin Cheng of The Economist is in second place having risen from 727,000 in Week 2 to 66,000 now. Marcus Simmons of Yudu is in 3rd with a strong game week ranking of 100,000. 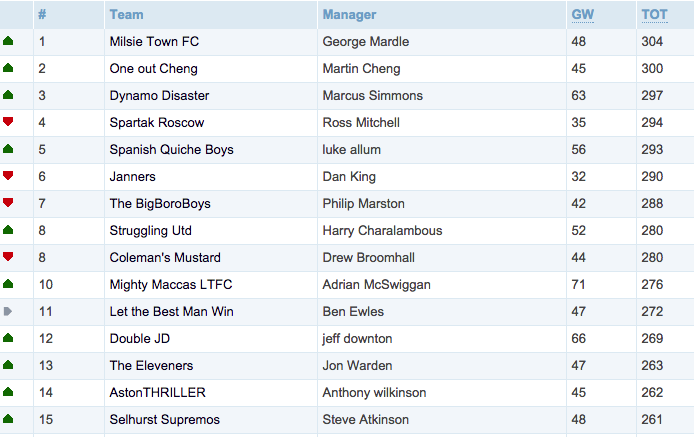