This weekend saw more upsets with Chelsea continuing their poor start to the season and West Ham providing a commanding performance at Anfield. By all accounts West Ham were horrendous the previous week so the turnaround is really remarkable. I’d even considered captaining Benteke ahead of Aguero, not that it would have made any difference anyway. It seems like lots of results are unpredictable right now. What’s going on with Chelsea and Hazard for example? Why does the top 4 include Palace, Leicester and Swansea? It’s really difficult to predict but then maybe not if you’re Dan King of Newsquest Specialist Media who not only resides top of the media industry league but is within the top 10,000 nationally. Possible weaknesses for Dan include Bolasie who, despite being electric, has some tough fixtures ahead; and Giroud who warmed the bench last week. Other than those two his team looks very robust. Dan has strong competition from Ross Mitchell of TSL at 35,000 nationally whose team is pretty much the template I’d say with little to concern him. He’s then followed by George Mardle of Bauer at 72,000 who’s just transferred in Shaqiri. Untested and risky or genius? Any position within the top 100,000 is good going but can these three maintain their strong start given the unpredictability of results? There have been plenty of wild cards played nationally so far but the top 3 haven’t used theirs yet. Martin Cheng in 4th place has done so and it returned immediate results scoring the highest game week score in the league. Nice. Here’s the top 15: 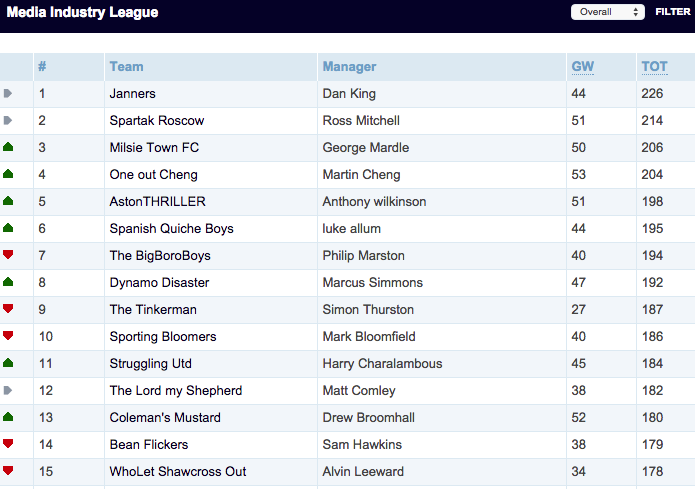