It’s that man again: Sergio Aguero comes up with the goods delivering a monster 23 point haul. A cursory glance down the league tells you who captained him and who didn’t. Pretty much everyone did, to be fair, but for those who didn’t it’s a world of pain. See Dan Linton of UBM’s 101 points in 8th place compared to Ben Robin of Singular’s 29 points in 9th for example. Dan jumped 115,000 places whilst Ben fell 70,000. In addition to the Silva/ Aguero combo, Dan also nailed Henderson, Fellaini and Terry. A top 6000 ranking for that one, nice. After something of a cold streak for Aguero and Silva both are now coming good again, especially the former. I guess he’s in everyone’s teams for next year by default. How expensive is too expensive though? We might have said the same of Toure and Ramsey last year but Toure’s price was just too much. My scrap with Danny Frondigoun of the Law Society Gazette continues as only 1 point separated us this week. The margin is 46 points which suggests it’ll need a high scoring captaincy differential. The Arsenal double is key. Ahead of the FA Cup final, which is now all Arsenal are really playing for, who will play both games and will not? There are so many players across the middle of the park for Wenger to interchange that one suspects few will play both. Here’s the Top 15 currently: 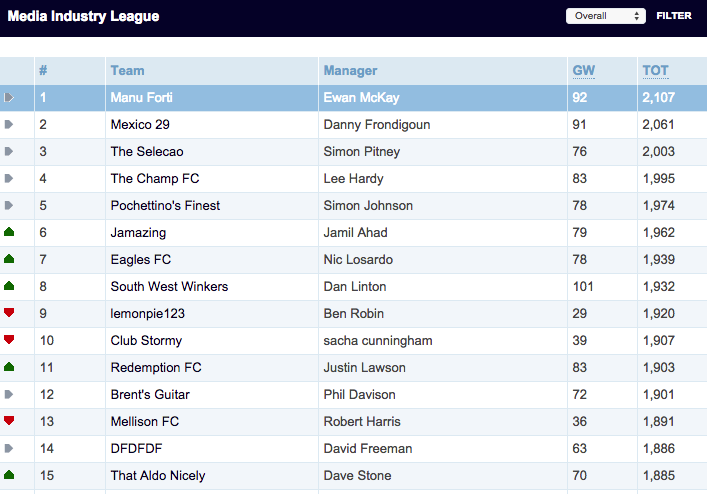