We’re getting to the sharp end of the season when lots of points can be made up on other managers in the media industry mini-league. Much depends upon which chips we still own. Much depends upon how we play the fixtures. So which teams should we bet on?

Here are the teams with two double game weeks remaining:

So it makes sense to load up here where possible.

Here are the teams with one double game week remaining:

Frankly, I can’t resist a double game week, let alone two. So I’ll be looking to load up on these teams as much as possible. Apart from three exceptions who have tough fixtures:

One might consider holding good-value options from other teams but otherwise it’s the previous teams above.

The only big alternative is whether to hold or ditch Lukaku. I think lots of people are still holding their triple captaincy chip though and so for the DGW of 37, managers will be looking to Aguero/ Jesus or Kane. Holding Lukaku as well might simply be untenable owing to cost.

In the media industry league Danny Frondigoun played out yet another excellent week with 69 points. Ranked at 7300 overall, this guy is so consistent. He has a 54 point gap which looks intimidating.

That said, the gap still can be closed owing to chips. In second place, Curtis still has both his Triple Captain and Bench Boost. Get these right in two of the three up and coming DGWs and he’s right back in the mix for the win.

Last year, for example, Sanchez and Aguero both racked up 25 point hauls that people triple Cd. How about Sanchez for DGW 36 on Triple C and then bench boost in 37? That could stack up to a 50+ point difference if it goes Curtis’ way. 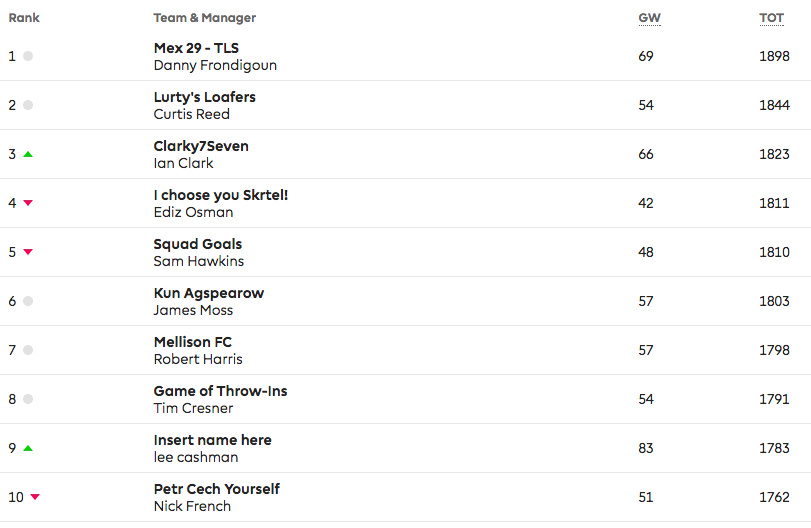