Wow. What an awful start to the season for Chelsea – who could have seen that coming? Based on my weekly scores so far, not me. Chelsea never just have a bad game though of course, it always has to be the result of some kind of mind games. For this one, apparently, Jose Mourinho made his first eleven go out and lose in order to shift attention away from the Eva Carneiro story. Dan King of Newsquest Specialist Media remains top of the Media Industry League after another strong performance this week, with Ross Mitchell and Simon Thurston of TSL Education closing out the top three. Dan is an experienced player of Fantasy Football but his highest finishing position has been 117,000, not 20,000 where he currently resides. Indeed, this was whilst captaining Hazard who brought in 2 points for him. So he could have been even further ahead. Can this form be maintained? Interesting strengths this week included Giroud, who’s surely a rotation risk, and Coleman at right back. Everton were poor last season but the year before Coleman was one of the game’s highest performers. Without the Europa League to distract could Everton kick on this year? I see 117,000 wild cards were played in Game Week 2. It’s certainly tempting now we’ve seen two week’s worth. Anyway, here’s the Top 15: 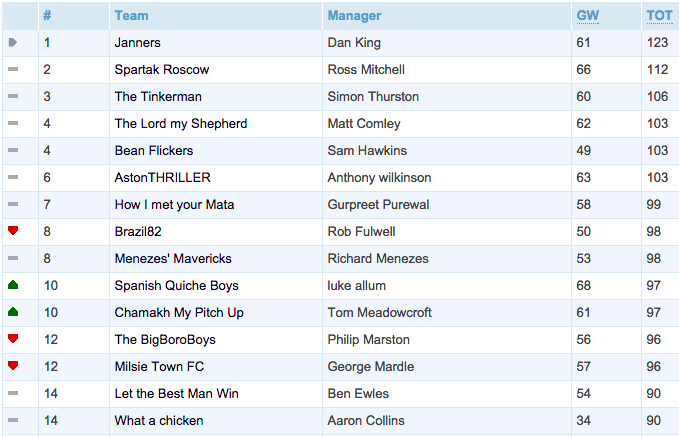 An important note from the Fantasy Football League by the way: