I binned Vardy and Mahrez in GW 10 of Fantasy Football. What a calamitous mistake. Not only do Leicester keep winning but all their points seem to come from just these two players. It might be time to move them on given their next three fixtures but (i) they might just keep scoring and (ii) most current owners will be reluctant to part with the increase in value they’ve seen. Perhaps shipping Vardy is most likely as there’s so much pressure on the front line with the likes of Kane, Aguero, Giroud and Ighalo all fighting for three places. Mahrez will always represent good value in comparison to other players in the midfield so perhaps he’s one to keep for the season (injury permitting).

The Media Industry Fantasy Football League is super competitive this year. Curtis Reed’s Lurty’s Loafers currently sits with a global rank of 31,368. This would have been good enough to win the league two years ago. Currently he’s placed 5th.

Top of the pile is David Hennessey of Ziff Davis with a global ranking of 3500 which is superb. David’s team is pretty much the template team with possible weaknesses around Sterling (mercurial) and/or not having KDB, Sanchez, Silva or Aguero. Of course, you can’t have all of them but one of these might start scoring and if they’re not in your team then you’re in trouble. Also, David’s already used his Triple Captain chip. Other than that though, he looks in very robust form. Great work from Leon Parks of New Statesman too. With 6 green arrows on the trot he’s climbed from 946,000 to 97,000 which just goes to show that it can be done. Transfers in over the last few gameweeks say it all: Barkley, Coutinho, Ozil, Ighalo for the past 4 weeks. Here’s the top 15 after GW 16: 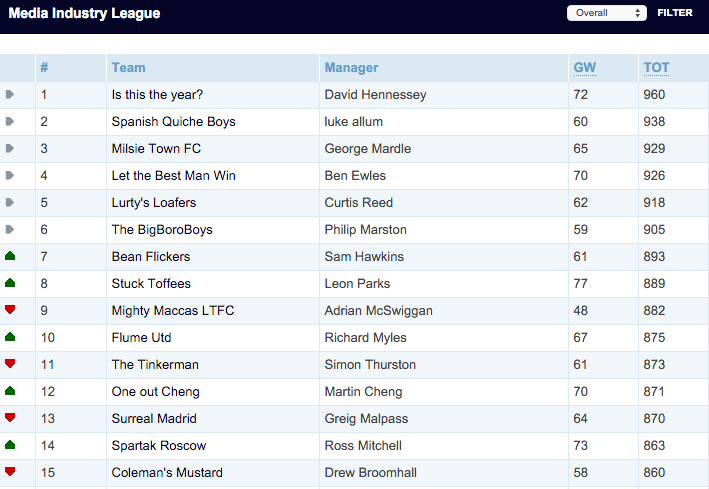