The Media Industry Fantasy Football League looks somewhat settled over the last few weeks with many names looking the same in the top 15. We’ve seen impressive movement to the summit from Danny Frondigoun of the Law Society Gazette and from Jamil Ahad of the ADBA but otherwise many of the other names look familiar at the top. Last year Danny finished 227,000 in his first season. Currently placed 11,000 it looks like you’ve found the secret. Can it be maintained? Jamil finished 146,000 last year after missing GW 1, and continues to do well, but is falling back from ranking 6000 a few weeks ago. Both have played their wildcards. Talking of which, all players in the Top 10 have played their wildcards so far except for myself and Lee Hardy. Could this count going forwards? Based on last year the answer’s probably not. I played mine in late Feb/ March ahead of a double game week and it didn’t work out. Maybe not for Lee though who has a strong pedigree in FF placing in the Top 35,000 for the past two years running. He’s also a member of more leagues than anyone I’ve seen, so he’s clearly a fan. One to watch out for. As the busy Xmas season approaches I expect to see more movement. With Aguero likely to be out for a while and Costa being consistent but not prolific, captaincy is going to be more open than it has been recently. Plus, how strong are everyone’s benches? Here’s the Top 15 as it stands after GW 15: 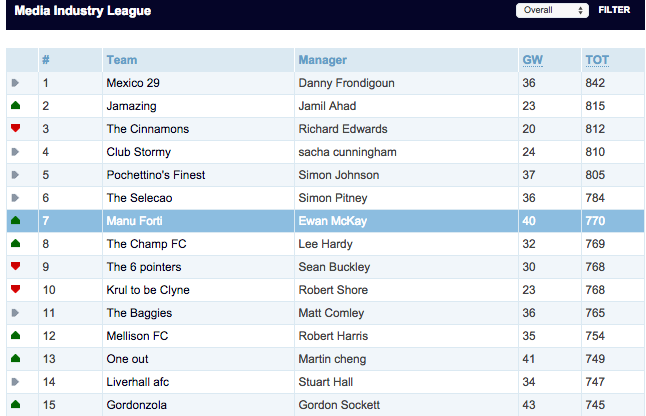