There were some high scores across the board this week in fantasy football with lots of managers’ predictions coming in. It’s always a right nuisance when you think you’ve done well and then you realise so too has everyone else in your min-league.

We have a new Top 3 in the Media industry fantasy football league this week as Curtis Reed of Bauer has muscled his way in after enjoying four green arrows on the trot thus moving him up from 149,000 to 32,000.

Curtis finished in 80,000 last year so he’s one to watch. Certainly some of his recent transfers have clearly brought in the points: KDB and Lukaku in GW 11; Ozil in 13; Kane for 14. Curtis has taken a couple of 4 point hits in recent times but that seems to be quite widespread this season. Personally I vowed not to take hits this year. That lasted 4 game weeks until I found myself languishing at 2 million+. Richard Myles of Flume enjoyed an historic score this week posting the highest in the league at 88 points and placing his GW 31,000 nationally. Richard’s only in his 3rd season for Fantasy Football, so still reasonably new to the game, but his team is looking pretty hot right now. He’s up to 279,000 nationally against a back drop of previous seasons finishing 762,000 and 1.9M which will surely mean he’s heading to nose-bleed territory soon. Immediate concerns will have to be Sanchez and whether or not to keep the Leicester players given their fixtures. Like Curtis, Ben Ewles of Newbay Media has also moved strongly up the league with four green arrows on the trot moving from 214,000 to 44,000. He’s another manager to watch. The games will come rapidly now that internationals are out of the way and mid week European football is slowing down. Keeping 15 uninjured players will be key for the weeks ahead. Here’s the Top 15 for the Media industry fantasy football league after 14 weeks: 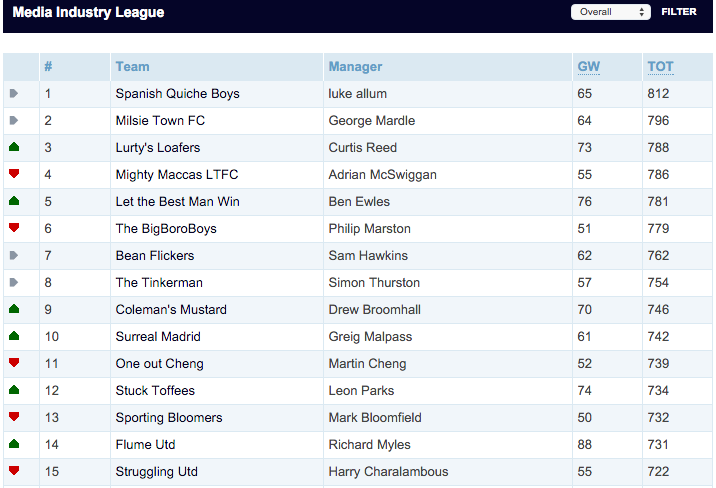 Also, note that Luke Allum has been found. He’s ex RBi but enjoying time on the beach right now.