Seven teams in the Media Industry Fantasy Football currently rank between 700 to 747 points with top placed Luke Allum ranking within the top 10,000 in the world. It’s pretty impressive stuff with Haymarket’s Sam Hawkins having a game week to remember bringing in a haul of 99 points and placing his game week within the top 10,000 too. 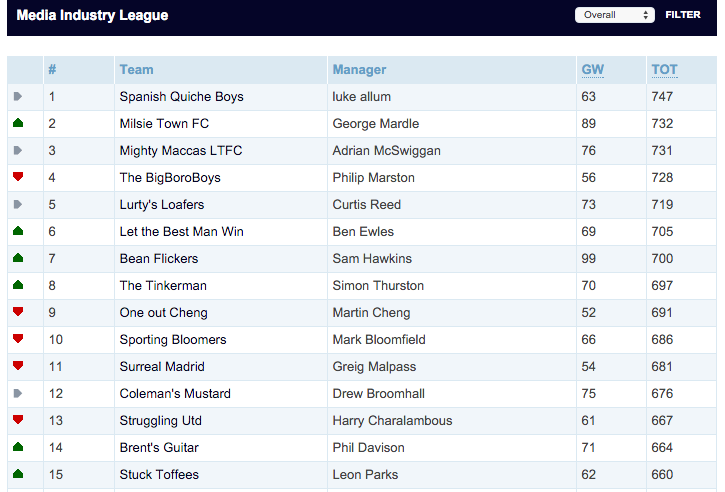 There are lots of forwards scoring right now making our decision making up top fraught. I don’t have Kane, for example, and he’s in fine form with Spurs being unbeaten this season, since losing on the first day of the season, and being talked about as title contenders. But then who do you drop? Vardy, Lukaku, Aguero, Ighalo all look impressive. Giroud and others look good too. Add to that the midfield template of Mahrez, De Bruyne, Sanchez, Coutinho, Ozil, Barkley, and now Firmino? It’s tough to navigate which are the right players to pick although with seven teams in the top 100,000 I think the league’s very competitive. Behind Luke Allum is Sports Revolution’s George Mardle followed by Incisive Media’s Adrian McSwiggan. I see Phil Davison, our winner from two years ago, is back into the top 15. Maybe disproving the common myth that his performance that season was just a flash in the pan 😉 All games played on Sat/ Sun this weekend.   After Liverpool’s win on Saturday, how good is Coutinho right now and should he be in our teams? Here’s a summary from Think Football: Coutinho has come alive under Jurgen Klopp scoring five goals in three games and recording one assist in the process. His total for the season is five goals in 12 games, plus three assists. In just 12 games he’s already matched his goal scoring total for last season, and five goals is his best for one season at Liverpool. He will surely go on and better that in the coming weeks. His great form has drawn interest from FC Barcelona who have been linked with bringing him to the club in recent months. Coutinho is just 23 years old but is enjoying a fine spell for the club. With Liverpool now looking to have a renaissance under Klopp, Coutinho is clearly going to have a central role to play. Alongside Roberto Firmino who was central to their fluid, attacking style of play at the Etihad. Too quick and too slick for City to contain. Coutinho is emerging into one of the stand out players in the Premier League. Whilst Jamie Vardy dominates the headlines, Coutinho is possibly the best player in the league from a technical stand point. A fine passer of the ball, creator and technician. He runs at players, creates chances and scores goals, what more could you want from an attacking midfielder? At present Coutinho would walk into any side in the Premier League and the fact that FC Barcelona, the best team in the world, are after him, demonstrates his ability and quality.