This weekend saw Chelsea continue their seemingly unceasing domination whilst two of the ‘big’ teams continued to struggle in Liverpool and Man Utd. I can see Man Utd will turn it around having spend a record amount in the last transfer window. However I cannot see what Liverpool are going to do. Sturridge back? Sure. But how much can he change the rest of the team? Confidence must be low. With Rojo out now, Man Utd will continue to look suspect at the back until the Jan window opens. This leaves the remaining Champion’s League spot as wide open as it’s been for years. Even Spurs don’t particularly seem to want it this year. The player of note in the media industry fantasy football league in recent times has been Jamil Ahad, who works for the publishing arm of The Anaerobic Digestion & Bioresources Association. His team, Jamazing, rocketed up the national league from 1,200,000 in Week 2 to 6000 by Week 8:

Let’s hope this wasn’t a high-water point Jamil as I see two red arrows since then. Still, 20,000 is very impressive. As I remember Jamil did well last year too despite missing Week 1. A rare investment in both Costa and Aguero seems to have paid off. It really limits monies elsewhere in the team though. Who’s this player ‘Yun’ then Jamil? Those just behind Jamil are the familiar strong names of Sacha Cunningham, Simon Johnson and Richard Edwards. Of note, however, is that this week’s highest points total came from last year’s runner up Steve Connolly of Intent Media. Having dropped to 1,600,000 previously, Steve notched up a whopping 91 points this week placing him 12,000 for the week. Apart from his bench, I’d say his team called “Ramsey’s Nightmares” looks solid and I imagine will continue to climb. Waking from the nightmare Steve? Here’s the current Top 15. Excuse the highlight on my name – I can’t change this. 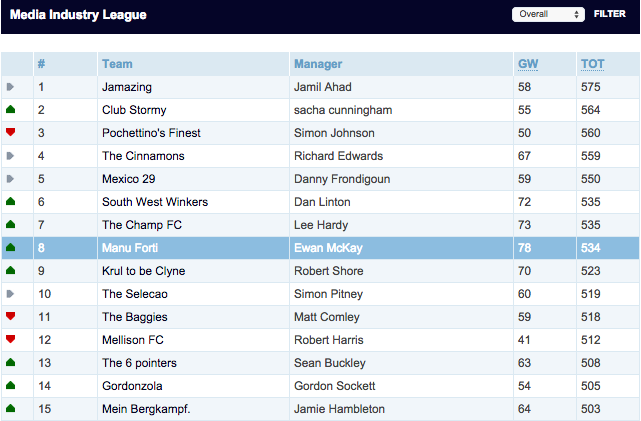