This week’s points were really set alight by Kane’s 17 point haul hat-trick. But of the top 6 scorers in double figures, three came from Sunderland which is really quite surprising given their form: Pantilimon (10) Billy Jones (15), Fletcher (10). Pantilimon was always good for save points. If Big Sam can tighten up at the back then maybe he could be a good transfer? The Media Industry Fantasy Football League has a new leader this week in Phil Marston of Wolters Kluwer. Interestingly Phil played his Bench Boost chip this week which delivered rewards in bringing Swansea’s 9 points from Ayew into play. The other two on the bench provided just 4 between them. The Bench Boost chip looks to be quite a useful one as you can acquire points from an additional three players. Personally, I’m looking to play this in a double game week, maybe after playing my second wildcard, in order to maximise it. Equally, it would need to involve lots of teams doubling up otherwise you’d not have the players on your bench! Phil is 12,000 nationally which is very impressive. He has played his triple captain however so it allows others, who have not played theirs, a chance to catch up. Imagine if you catch Aguero’s 25 point haul or the like in such a way? In second place is Adrian McSwiggan of Incisive Media ranking 15,000 with The Economist’s Martin Cheng in third ranking 37,000. So the top 3 are as highly placed as we’ve ever had in the league over the past three seasons. The standard has improved. Here’s the Top 15: 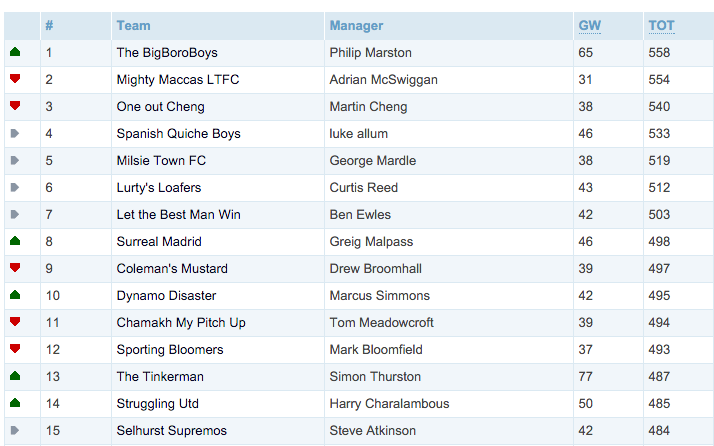