After much anticipation the Premiership eased back into action this weekend with a number of surprises up its sleeve in terms of performances and results from teams and players alike. A number of the big guns simply weren’t firing. Arsenal’s 10/12 point-saving new keeper Cech having a ‘mare and the team conceding 2 at home to West Ham; 16 year old Reece Oxford not only holding his own in the middle of the park for the Hammers but even reprimanding Sahko for not passing to him; Chelsea looking ineffective; Liverpool drab. Man City were firing with Toure back in the goals and influencing games. Could he be back to his form of two seasons ago? Did City buy him a massive cake over the summer? Leicester looked great too. Man Utd got the win but will still surely take time to gel. This could be a wide open season with most teams capable of beating all the others. How did the media industry fantasy football league perform? Many suffered. One team excelled: Newsquest Specialist Media’s Dan King, with a team called ‘Janners’, racked up 62 points placing him in the top 23,000 for the Gameweek. Dan gained few points from his forwards (like most of us) but did really well across the back including holding Mr Toure himself. It’s a solid looking team too. I think we can expect to see Dan towards the top of the league for some time. Who are the top transfers in so far this week? Romero for Man U in goal – but will he remain No 1? Gomez and Darmian as affordable defenders for big clubs look good investments. Mahrez similarly. As for Kone, I guess he’s a cheap third striker allowing the purchase of two other biggies. Will Kone play if Martinez goes one up top? 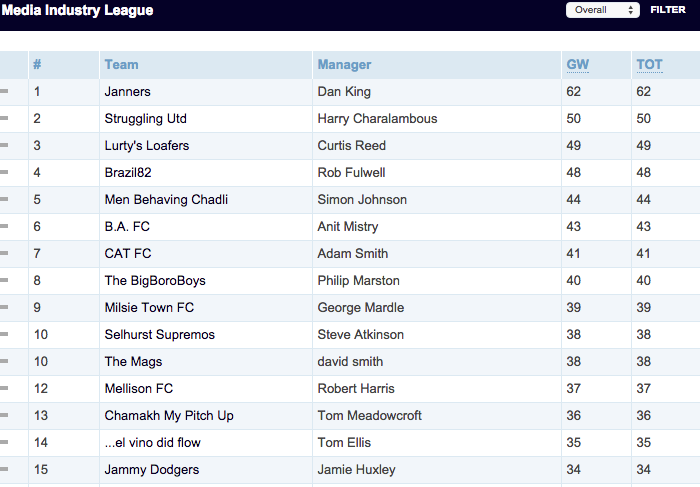