Recent results will have many football managers scratching their heads as they try to navigate the imminent fixtures and double game weeks.

Motivation seems to be key for many teams so how will it apply going forwards?

Some teams will be on the beach pretty soon if they’re not already there. So West Ham, Watford, Stoke, etc. Should we avoid those players? Some potential beach bums are still performing such as Leicester, plus Southampton have two DGWs ahead. Should we target those in the relegation battle instead? Are Sunderland too far gone for example? They have really good fixtures. Swansea should have been good recently if this is true; Hull are mercurial. I can’t decide whether to go for them or avoid. Certainly Defoe is doing me no favours. Of the top teams, are Arsenal now trying to get rid of their manager as Chelsea did last term or is it simply because of Wenger playing Welbeck up top? This will affect our choices. Can Liverpool continue to win with such a threadbare squad? Only Chelsea and Spurs seem consistent and, even then, if Chelsea can get a result on the weekend then they will be thinking they have it wrapped up. So what of Costa, Hazard, etc.? The top 10 in the media industry league currently ranks from 9600 up to 166,000 globally. This is from 4.4 million players so I think that’s pretty impressive. That man Danny Frondigoun still rides high and has a 42 point cushion over second-placed Curtis Reed. Danny seems to have the golden touch to the degree that I’m not sure if he can be caught any more. His bench could likely do with some work but the first 11 looks strong. He’s not afraid to take hits either spending 24 points between GWs 26 and 31. Most football managers have used many of their chips already but for those who haven’t it’s going to be tricky. The doubles in 34 don’t seem to offer anything too enticing. Suggestions of an Arsenal double in GW 35 seem less intoxicating given recent results. After GW 34 so many teams will likely be giving up or resigned to their position, that some results and scorers could be random. Chelsea could be playing dead rubbers pretty soon for example; Sunderland too. The final game week typically shows some random scoring. So when to play those chips? For those with Triple Captain I’m thinking only Kane, Lukaku or Aguero look like the most explosive options. Or Son maybe? With his 19 point haul this w/e he really stands out. He’s only owned by 8.9% so could be a real differential too. Here’s the top 10 after GW 32. Just 6 more GWs to play … 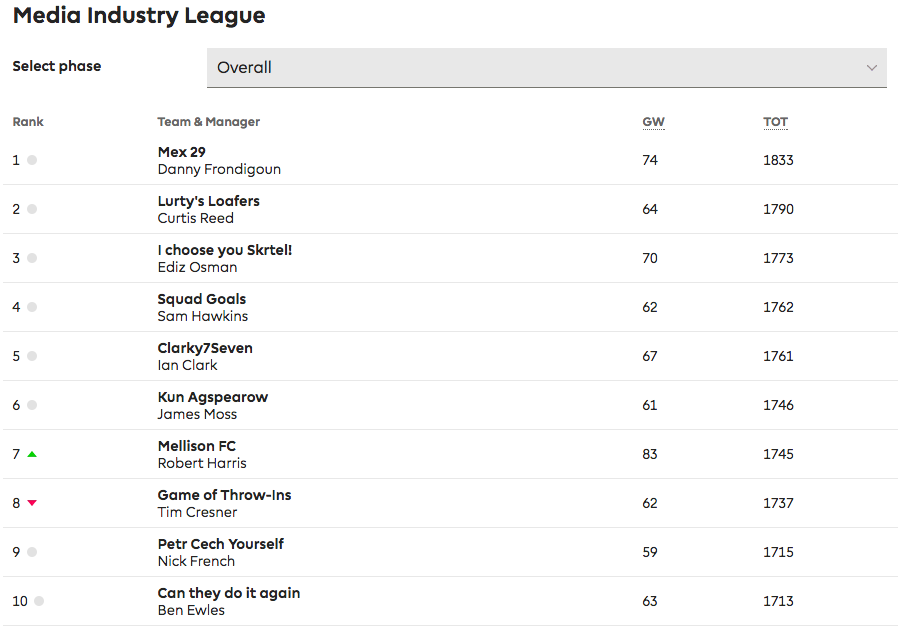