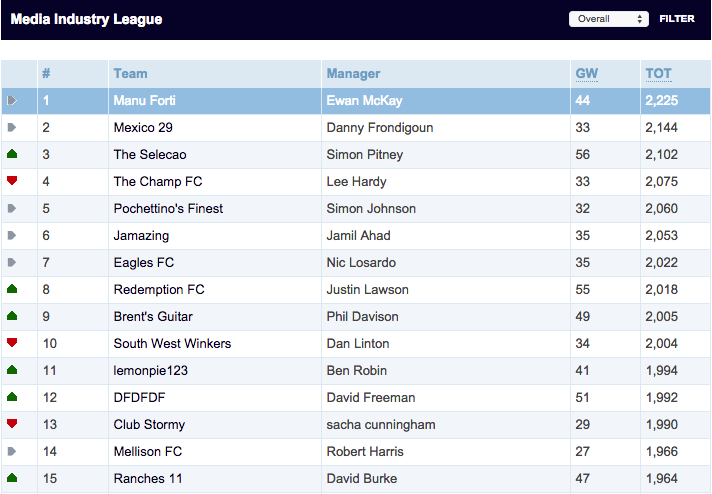 And the winner of the Media Industry Fantasy Football 2014/ 15 is, er, me. A bit embarrassing but I enjoyed a crazy run of form over the final 12 weeks of the season with a green arrow each week improving my position from 121,000 to 5500. One of my major benefactors was Benteke who really turned it on. Other FF teams did not enlist his services (perhaps retaining Kane instead) until late which allowed my team to climb the ranks. Congratulations to Danny Frondigoun of the Law Society Gazette for coming second with a ranking of 26,000 in only his second season of playing the game. This represents a major improvement on last year’s ranking of 227,000 and shows promise for next year. Danny really peaked in GW 22 when he was ranked 640 in the world. Impressive. Simon Pitney of Express Newspapers came in third place with a national ranking of 52,000. Pitney also saw significant success in the latter weeks of the season improving his position from 202,000 in GW 31 to 52,000 in just 7 weeks. GW 34 was particularly special where his back three racked up 41 points alone helping him to a GW ranking of 1036! Like Danny, this was Pitney’s second season playing the game so one can expect another strong performance next year. Last year’s winner Phil Davison confirmed his pedigree with a top 10 finish. Steve Connolly who pushed him close retained a top 20 position. A note to acknowledge Dave Stone of Time Inc’s performance who ended up in 16th place despite consistently being in the top 15. It’s a bit arbitrary that I cut and paste the top 15 here and not another figure. But Dave managed to fall just outside of that select group in the end. Like Tranmere on so many occasions it was a terrific effort to snatch defeat from the jaws of victory. Good work all and I hope to see you in next year’s league for the season of 2015/ 16.