David Hennessey of Ziff seems to be pulling away at the head of our Fantasy Football League for the media industry after another GW round in the top 100,000. Crucially, he got his captain right in picking Payet who scored 13 points, thus making 26. Captaincy seems to be so key this year. There’s no one player doing it week in, week out. We all have a player, or players, who do well on a week but are we captaining them? They seem to rotate on a week-by-week basis. If you alternated and managed to get it right most weeks then you’d fly up the tables. For my part I’m doing quite poorly on captaincy – going with Kane last week (2 points) and then Aguero this week (2 points), etc. This applied to Sports Revolution’s George Mardle in 2nd place, who captained Rooney to bring in a massive 2 points, and to third placed Incisive Media’s Adrian McSwiggan who captained Aguero for 4 points. Taking these three teams as representative of the league as a whole, there’s differentiation in the sides across the front and back but the midfield is pretty template so it’s difficult to make significant gains here. All three have Ozil, Alli and Payet for example. Up top though Adrian has Austin and Giroud which I’d count as pretty risking and adventuresome. George has Rooney in his three. He has form but surely this will be Vardy next week? David doesn’t have Aguero who’s owned by 31% of players which again could be viewed as risky as he’s always capable of a brace or hat-trick in any game. No Costa anyone? So if you’re like me and it doesn’t feel like you’re able to progress right now, there’s still plenty of variation that will allow movement if you can get it right. Take LinkedIn’s Steve Atkinson for example: Steve was ranked 524,000 in GW 21. By GW 25 he was 67,000. Steve still has all chips too so I’m guessing he did well with his captaincy choices. He’s currently ranked 6th and has a good chance now to push on. We have a few blanks next week with no Man City, Everton, Liverpool or Newcastle. Will everyone be able to field 11 players? Here’s the top 15 after GW 26. 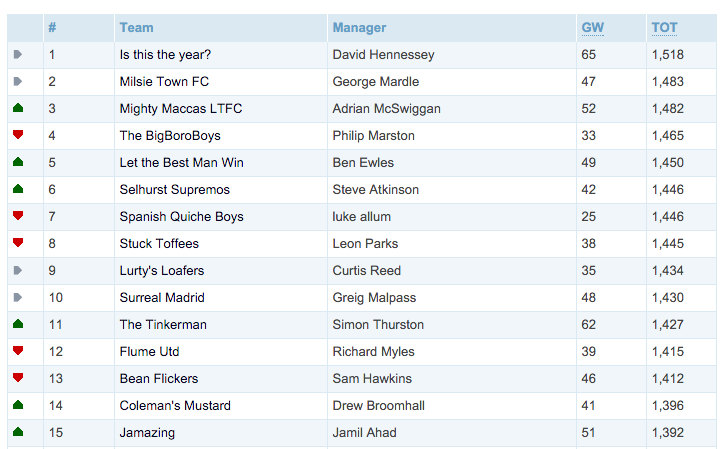