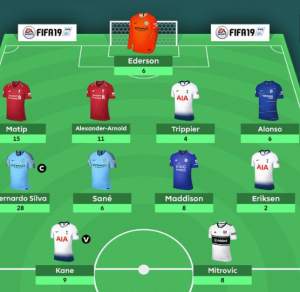 This was my team this week. If only.

Wouldn’t it be great though – just one week?!

The players above formed the top team from the weekend. You’ll see the guy who picked this team captained Bilva. I think that’s pretty unusual. Most captains didn’t excel themselves, i.e. Salah, Hazard, Aguero. Mitrovic keeps on doing well though. I need him in my team but this season I’m adopting a new approach: no transfers until the end of the week and no hits at all (unless injuries mean I can’t field 11). Indeed I’ve been carrying Pickford in goal since the beginning and can’t get rid of him as other fires need putting out first. Have most already used their wild card? I’ve been holding out on mine but it’s imminent for sure. As a result I’ve definitely lost a great deal of team value in comparison with other managers. This can be good in that I’ll not hold onto players simply because I have value tied up in them. However it could be that come January onwards, I’ll have much less money to spend than other managers and so I’ll simply not be able to access all the players they can. The availability of budget options will dictate if this is a problem. Wolves seem to offer value throughout the squad. Throw in Ings, Mitrovic, Wan-Bissaka and a team should be feasible. The difficulty then is how do you distinguish yourself from other managers? If we all end up owning a vague combination of them, which is likely, then it just depends which of the big hitters you have in your team and that you captain. Hazard might come in for you one week, as he did for me last week. Or Aguero for others, as he did in Week 2. Considering there’s now 5.6 million players these days, I think the standard in our mini-league is pretty decent. Lee Cashman of Legalese is top at 26,000, then Jamil Ahad at EuroMoney on 47,000 and in third place is James Moss of Manning Gottlieb OMD at 61,000. James is a manager who was up there most of last year. One to keep an eye on I’d say. How will the others fare? All have played their wild cards and Jamil has played his Triple Captain. Here’s the Top 10 after GW 6: 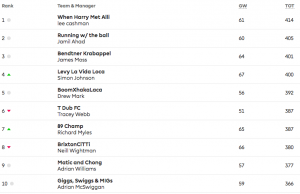