It’s been a while since I’ve sent an update on the media industry football league simply because of busy fixtures over the Christmas break. The League has performed exceptionally with the top 9 players being ranked within the top 100,000.

Other than the key Leicester duo during the first half of the season, players seem to alternate on a weekly basis with who’s taking the spoils. It could be KDB or Aguero one week; Giroud or Igahlo another; then all manner of possibilities for a subsequent week.

The points are really spread making it hard to get ahead of your competition. This applies to captaincy too. Get that right and you’re laughing. There are some interesting budget defenders in the last week – Daniels on pens for Bournemouth taking 18 points; Williams with 15 at Swansea – goal threat and clean sheet; plus Targett at Southampton who’s played out of position further up the pitch and costs only 3.7. David Hennessey of Ziff Davis and George Mardle, Account Director at Sports Revolution, are joint top on points and both within the top 3000. David has played all his chips but still has a wild card. George still has his wild card available and triple captain chip too. Neither player has Aguero but then Costa’s doing very well right now as with Kane, Lukaku, etc. What of the likes of Vardy and Igahlo? Keep them? Leicester’s fixtures aren’t great. There’s daylight between these two and the rest of the pack but there are plenty of differentials available. Add the chips in and I can see room for lots of movement still before the end of the season. Here the Top 15 for the Fantasy Football Media Industry League after week 22: 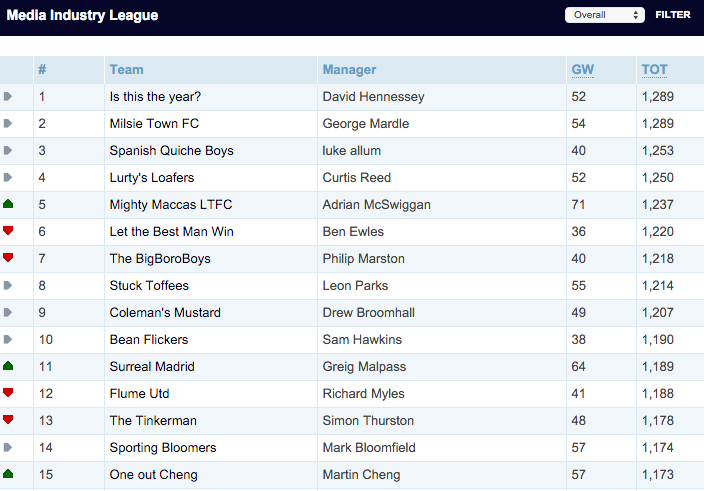