Hands up those who had Morata’s 13 points in your team this week. Nope? Me neither. But he’s priced at 8.7 which, I have to say, I find surprising. Lacazette is cheap at 9.7 but Morata at 8.7 surely has to get some of us thinking. He’s played at least 73 mins in each of the last three; a brace in his last game; plus he has Everton and Fulham at home in the next three. Got you thinking? One reason not to bring him in is perhaps because most of us have Aguero, one cheapie and then A.N.Other. Given Arnautovic’s fixtures and his price at 7.1 then he has to be a strong prospect. I’m a bit gutted about Arnie because I messed up twice with Mane which meant I couldn’t make the switch before the weekend deadline. I’d previously brought Mane in on my wildcard, watched him drop by .1 and then moved him out before the end of my wildcard. I then brought Mane back in last week after he’d gone up a further .1. It meant I was .1 short of being able to trade Mitro for Mane. Idiot. Man City are still the team to beat ATM. Most will own Aguero and Mendy. They’re pretty much must haves. So who’s your third player? I considered Sterling on my WC but at 11.1 he really limits the rest of your squad. If City play then I’m going to captain Aguero. So holding a 11.1 MID who I’m not going to captain is a bit steep. Nevertheless, 21 points at the w/e. That’s his third double digit haul in his past seven games. Clearly a strong ratio. How are managers in the media sales and marketing league doing? James Moss of Manning Gottlieb OMD is still top residing at 18,000. James is going to be tough to shift. His highest ever finish is 559 which is incredible. I don’t think I know anyone who’s finished in the top 1000. Plus his team looks to be template and I’m sure he’ll be moving out Mitro this week (bet you wished you’d kept Sterling!). Still, he’s had three poor game weeks on the trot so you never know. Next in the league is Tracey Webb. Does anyone know who Tracey is? Drop me a line. I don’t know. Then it’s Drew Mark of Clear Channel. Drew hasn’t yet played his wild card so he’s in a good place to be. Not many changes required ATM except to shore up the bench. Maybe for Xmas Drew? Here’s the Top 10 after 11 weeks. 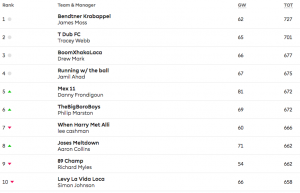