After game week six I was asking, ‘should we invest in Manchester City?’ Well, with 23 goals in their last five games it makes this question sound somewhat daft. The issue was always around rotation but it seems that rotation doesn’t matter: they’re all going to score double figure hauls regardless. City have Aguero coming back soon but that doesn’t seem to affect things too much. All will get minutes, just occasionally your player might not start. Though Burnley have been orbust away from home in recent games, surely they can’t hold back this kind of quality. The big question so far this season seems to be how many do you play up front: two or three? When they’re all fit then there’s numerous top strikers but they’re expensive. So you either go for (i) three biggies and diminish the rest of your team , or (ii) two biggies and Firmino or Vardy, and weaken the rest of your team, or (iii) only two biggies and then fill out a strong defence and midfield. The classic fantasy formation was 3-4-3 but so far this season is that now in doubt? The problem is that third striker. Currently, Firmino and Vardy doesn’t justify the third position. With 35 and 40 points respectively you have numerous midfielders and, particularly, defenders who are yielding much better value in terms of points per cost. Vardy’s immediate fixtures are decent so things might change for him. Firmino needs to wait until GW 10 onwards. So you either go big with a third heavy hitter up top, or you go low and put your third striker on the bench (or play and pray). Both have their pros and cons and this is the choice we’re all going to have to make. Personally, I’m going with the latter. Time will tell if this will work out. From our top three teams currently, all are going for two biggies and a cheapo third striker. The difference for our top two of Sean Buckley and Drew Broomhall is that their cheapo player is scoring: Tammy Abraham has three goals in three games. For James Moss, in third, he has Newcastle’s Joselu who is a bit ‘meh’. Nevertheless, it means he can field a strong midfield. For how long can Abraham perform? Bony is coming back but you can’t restrict Abraham at the moment. Apart from Arsenal away in GW 10 his fixtures look good. Here’s the Top 10 after GW 8: 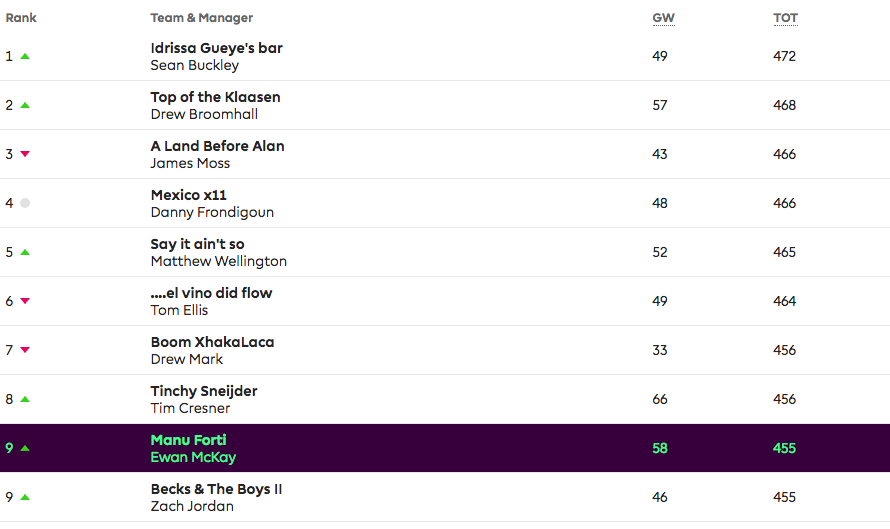