When I last wrote about the media mini-league between GWs 23 and 24, Rob Fulwell of Egencia was in 2nd place and only 31 points behind the league leader (Tom Ellis of UNiDAYS). Blimey, how things can change. After four consecutive red arrows he’s now in 10th place and 76 points behind the league leader (WBR’s Sean Buckley)! It just goes to show how quickly you can fall down the rankings. How did this happen? The slide seems to have started when he shipped out Kane on the 30th Dec when Kane had a potential injury. It turned out to be not too severe however and Rob clearly wanted him back. Cue shipping out Salah and Firmino to bring Kane back in. In hindsight we know this was a big error but, of course Rob wouldn’t have known this at the time. He only brought Salah back in last week but then didn’t captain him, choosing Kane instead, and now he has Jose’s bus to face next week. Lots of managers seem to be loading up on players to fill their quota for the limited fixtures coming our way in GW 31. But is this a good idea? So many aren’t firing yet. Who do you buy from WBA at any point this season? Everton, Watford and Bournemouth are playing poorly currently. Crystal Palace have been alright recently and Huddersfield too but it’s not inspiring. We’ll all have three Liverpool players. Personally, I’m loading lightly and, so far, it looks to have paid off. The likes of Walcott et al just haven’t returned so far. Maybe he’ll drill in a hat-trick in 31 but it looks unlikely. The chips are going to be become really important soon for those who still have them. I’ll come back to this subject in a couple of weeks but, effectively, we can wild card ahead of the double game weeks to choose your ideal team and then incorporate that with the bench boost and triple captain on those specific weeks. Europe, the FA Cup and teams on the beach will throw us the odd curve ball but otherwise it’s good times ahead for those still holding their chips. Here’s how the Media Industry mini-league looks after game week 29 (2017/18). Only five points separate the top 3 so it’s ridiculously tight. The usage of chips I feel will be key. 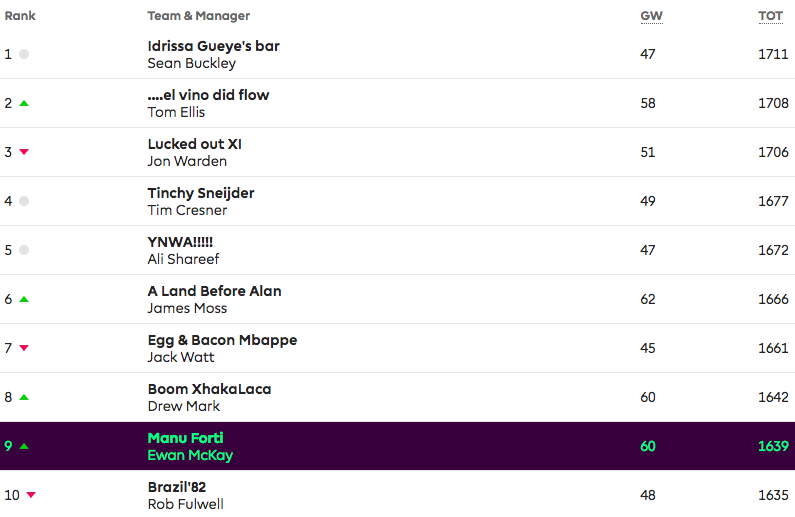