We’re three weeks into the new season and I’m pleased to report that there are three new faces at the head of the league. Blain Tulley of The Drum sits in first place with an overall rank of 78,000. Drew Mark of Haymarket sits in second and Ross Mitchell of TES Global sits in third. Based on a history of performance in previous seasons, Ross is the highest placed finisher so far but it was still in 6 figures so he’ll be looking to improve upon that this year if he’s to win the coveted title of top performer in the media industry league. Who had a captain that performed this week? For all of us who captained Lukaku, which is most of us, we can console ourselves that the likes of Kane blanked yet again. I was fearful he might punish us. There’s much to consider right now as we head into the international break. I don’t know about you but price rises and falls definitely force my hand, e.g. I swapped out Southampton’s Stephens for WBA’s Hegazi prior to last week and missed out on 5 points as a result. I know that last year’s winner didn’t worry himself about price rises and falls so maybe that’s the best way to go. Kane’s definitely a worry. If you own him then for how long do you allow him to blank? He is quality and will get lots of goals. But when? Equally, if you don’t own him how do you fit him in unless to swap out Lukaku or use your wild card. I’d planned to wild card at around this time but I don’t feel the need just yet. For any of us with Arsenal players in your team it feels like there’s a need to get rid. But surely they can’t be as poor in their next game against Bournemouth (H) as they were against Liverpool at the weekend? The problem seems to be one of morale I’d say based on their performance at Anfield. To improve their mental fortitude then what needs to happen? Wenger to go? Probably. So if he remains then maybe it’s best to get rid. Has anyone else wild carded yet? Our top three haven’t. Typically, it’s a good time to do so after the international break, circa GWs 4/5. Here’s the Top 10 after three game weeks 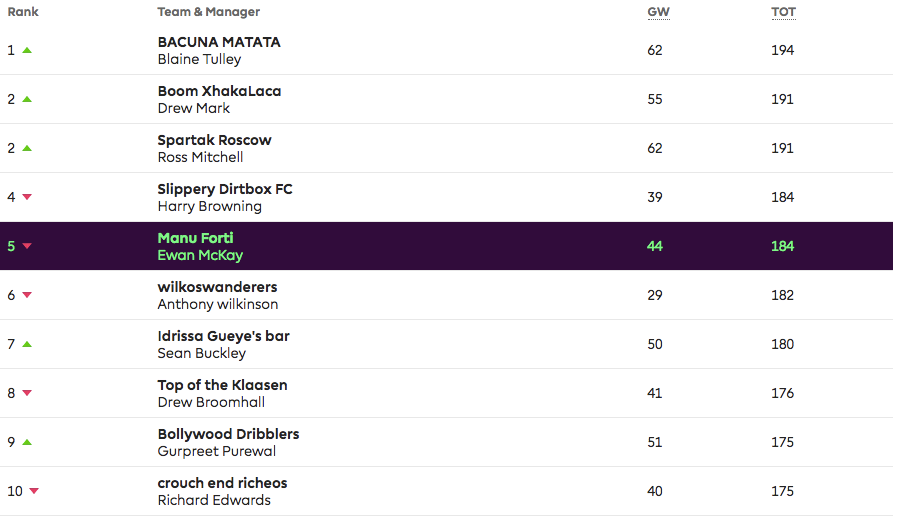 Here’s the code for any of your colleagues to join the mini league if you’re a sales or marketing professional in the media industry: 400989-158547