There was lots of high scoring this week from numerous heavily owned players. If you captained Kane, like me, then you were initially pleased with the prospects for that w/e. When you then find out that you still didn’t achieve the average score by the end of Monday night then you think WTF?! Most well-owned strikers scored. Plus some major names scored big in midfield too: Sane, Coutinho, Silva, etc. But what to do with Man City players? They keep on scoring but it’s from all over the pitch. If you own Jesus then you’d have been disappointed to miss out on another goal fest. If you own Aguero then you’re going to be worried about him being dropped again as he was against Bournemouth in GW3. Personally, I’m going to avoid Man City for now and try to stick to options who will definitely start. For any City midfielder see Mane, Cout, Eriksen, Alli, etc. For Aguero and Jesus it’s potentially more tricky but equally Morata, Kane, Lukaku, Lacazette are similarly priced, will all start, and can all score big. Man United are an interesting one as I’m not convinced that Mou will keep letting his horses run freely. Investing in United’s defence looks wise although they do have some tricky fixtures coming up after this weekend. I can’t help but think Mou will lock it down against the big teams and play on the counter attack. As such, I’ve traded Lukaku out and hope he doesn’t hurt me too much against Palace this w/e. It could be a cricket score. In the media industry league I’ve plummeted from a top 3 position a few weeks back to 18th. It’s not looking good for me. For Sean Buckley of WBR, Richard Edwards of Patsnap and Anthony Wilkinson of Shephard Media, however, it’s been good times with high scores keeping them at the top end of the league placed 1 to 3. Sean’s ranked at 67,000 with five green arrows improving his position every single week. Pretty impressive stuff. This is only his second season so maybe he’s taken last year’s experience and is looking to build on it. With no chips played, he’s looking good. Here’s the Top 10 after GW 6: 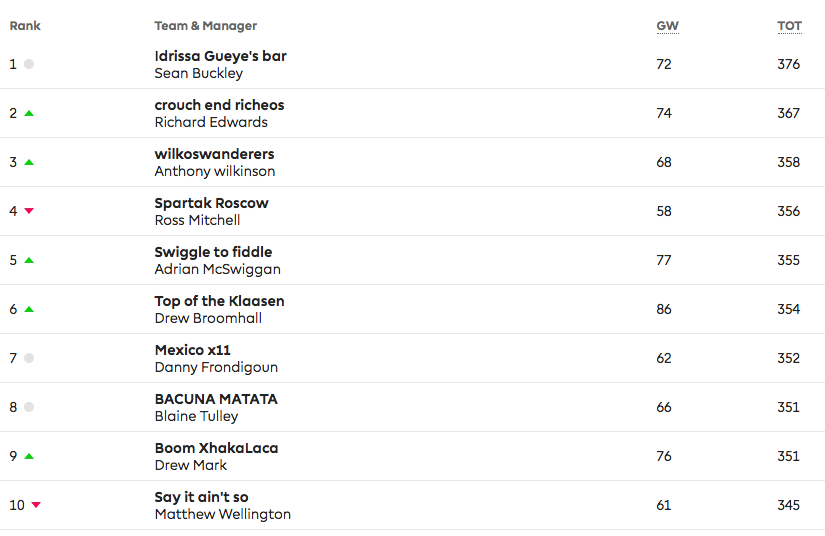