Congratulations to Adrian McSwiggan of Incisive Media for wining this year’s league. Furthermore, he finished 23,740 globally after not having been able to crack into the top 100,000 in the previous five seasons. He really made huge jumps after GW 5 where, incredibly, he moved from over 1,000,000 to within the top 7000 in five weeks:

Key moments? Adrian moved Jack Butland into his team in GW 5 but otherwise the transfers don’t look too significant at this point. The rest of the team must simply have clicked. I guess you had the Leicester players from early on Adrian? He then remained largely in the top 100,000 until three green arrows in the final weeks meant he claimed top spot. The genius captaincy of Giroud in the final week made all the difference bringing 34 points from one player. Tough luck to Leon Parks of the New Statesman in 2nd and David Hennessey of Ziff Davis in 3rd. Leon scored his top finish ever beating his previous PB from the 09/2010 season by placing 27,339 globally. David smashed his PB from three seasons ago coming in at 44, 795. Here’s the Top 15 at the end of the season: 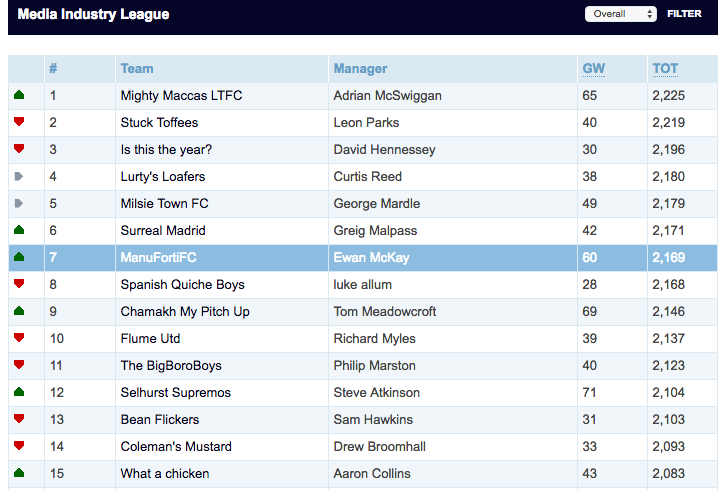 Adrian – I’ll be in touch to organise your prize. Good work all and I look forward to seeing what you’ve got next year. Feel free to share with colleagues in the industry if they’d like to take part next year. Cheers, Ewan.