After a huge shake up in the double game week 34, 8 teams now look to be in with a good shout of winning this year’s Media Industry Fantasy Football League. Remember, there’s a small prize awaiting the winner. George Mardle and David Hennessey are still in the top three but we now have a new leader in the New Statesman’s Leon Parks. Leon still had his triple captain and didn’t he play it well? I can’t see now but it must have been Aguero or Sanchez to provide around 75 points. Nice. This gave Leon a game week rank of 40,000. With a further green arrow in GW 35 he now sits at 24,000 in the game, well above his previous best of 75,000 in his inaugural season in 2009/10. I suspect you’re going to beat that this year Leon. George and David have now dropped back from the top 2/ 3000 to 32,000 and 34,000 respectively but I guess a drop of some sort was always going to happen as wildcards followed by bench boosts took place in 33/ 34. For some this is still coming in DGW 37. Does anyone still have this from within our top 8? No. That said, Adrian McSwiggan of Incisive Media and Curtis Reed of Bauer Media do still have their bench boosts so this could be big in 37. If one could gain 25 points from your bench then that would immediately put Adrian into the top 3 and just behind Leon. There are so many variables in the final weeks though and much could depend upon whether or not the title has already been decided. Here’s the top 15 as it stands after 35: 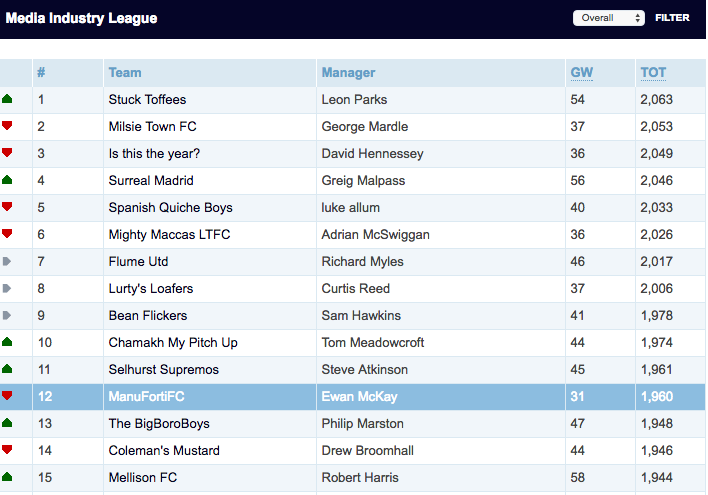